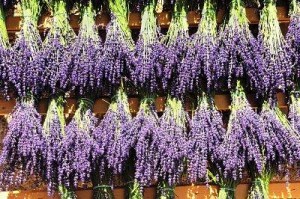 Aside from being an easy crop to grow, lavender offers many value-added income opportunities. The best part is that you do not need to grow it in a large scale, commercial setting. In fact, just as a backyard grower you can still cultivate many different profitable lavender varieties.

There are a number of additional products that can come from a small lavender growing garden. You can also add these items to your lavender farm as added income generators. Lavender can be sold in dried bundles or as buds. They can be used to create aromatherapy products or used to create skin care items. You can also use dried lavender in scent pouches/sachets and in herbal pillows.

Lavender is rather amazing for a number of reasons. Not only does it possess a fragrance that is calming and pleasant to the senses, it offers so much more. The plants come in many different colors and growing habits which make it suitable for just about any growing situation. Lavender is easy to adapt to any garden setting, whether you plan to grow it in a plot in your garden, in raised beds, flower boxes or a greenhouse.

The lavender family tree includes the herbs sage, thyme and rosemary and it has been popular in culinary uses as well. The use of lavender dates back centuries to where it was used as a disinfectant by Roman soldiers and also as a scent in their public baths. It is still popular when used in cosmetics and perfumes in addition to the other value-added uses already mentioned.

The Most Profitable Lavender Varieties

This is one of two of the most widely grown species of lavender. What makes this one so popular is that it is considered a cold-hardy species which means it thrives in cooler climates. The plants produce a grey foliage with flowers that will be anywhere between white and purple.

Of this species there are three varieties to focus on most and they include:

Featuring a continuous bloom in most regions, in areas with a long growing season you can expect two blooms per year – late spring and fall. The Buena Vista has medium purple flowers on 12-inch stems and a strong fragrance.

Another cold climate producer, this variety was developed in England in the 1930s. It is a high-yielding plant with light blue flowers and also produces a high volume of oil.

You have a lot to choose from when you select this variety which includes Hidcote Blue, Hidcote Pink and Hidcote Superior. Blue is a dwarf, Pink has pink flowers and Superior features dark purple flowers. All three hold their colors which make them excellent choices for dried displays and products.

2 – Lavender X intermedia
This species is actually a cross between Lavendula augustifolia and Lavendula latifolia and are referred to by the name lavandins. These are hardy plants that are typically later to flower than true lavenders. The varieties in this family also produce large plants and some produce a very high concentration of oil which is used in essential oil products.

Featuring long flower heads, this French variety is a favorite for fresh or dried flower bouquets. The dark blue flowers are vibrant and the heads dry neatly making them good choices to be used in sachets.

This is easily the most widely planted of all lavender varieties in the world. It features an extremely high oil content, purple flowers on long stems and a growth habit that sees the heads form a three-foot dome.

Another high oil producer, this variety is used in aromatherapy and soap products. It features large purple flowers with dark green foliage. The fragrance is light and pleasing.

As you can see, there are many opportunities for you to earn extra income through the growing of profitable lavender varieties. You do not need a huge plot of land to see a profit and with these helpful tips you should be able to get started with your own lavender growing business right away. To learn more, visit www.profitableplantsdigest.com

Possibly your savings or pension is just not enough to carry you through as you enter retirement. It … END_OF_DOCUMENT_TOKEN_TO_BE_REPLACED

How would you like to become a rental buddy? It’s an actual term and in Japan, for example, it is a … END_OF_DOCUMENT_TOKEN_TO_BE_REPLACED

Most baby boomers can easily relate to the importance of this service and as a result, … END_OF_DOCUMENT_TOKEN_TO_BE_REPLACED

There are many reasons why it is a great idea to grow garlic. In fact, since there is … END_OF_DOCUMENT_TOKEN_TO_BE_REPLACED

You know I like to talk about turning plants and flowers into a source of income. Probably one of … END_OF_DOCUMENT_TOKEN_TO_BE_REPLACED

I know, I thought the same thing. How would I have the time for building an import/export business … END_OF_DOCUMENT_TOKEN_TO_BE_REPLACED

Window washers everywhere say that business is booming. In fact, they report they are … END_OF_DOCUMENT_TOKEN_TO_BE_REPLACED

Here’s an idea where you may be scratching your head and asking yourself, how can you … END_OF_DOCUMENT_TOKEN_TO_BE_REPLACED

59 It is not very hard to start a delivery business. What makes it even easier is the fact that … END_OF_DOCUMENT_TOKEN_TO_BE_REPLACED

The facts speak for themselves. A senior home safety business is the perfect opportunity for anyone … END_OF_DOCUMENT_TOKEN_TO_BE_REPLACED

Busy people or those with mobility issues need someone to take their dog for a daily walk or two. … END_OF_DOCUMENT_TOKEN_TO_BE_REPLACED

You’ve heard of a tree farm, right? If you’ve ever wondered why they exist it’s because they are a … END_OF_DOCUMENT_TOKEN_TO_BE_REPLACED

Here’s an interesting idea. If you are semi-retired you are probably already pretty flexible with … END_OF_DOCUMENT_TOKEN_TO_BE_REPLACED